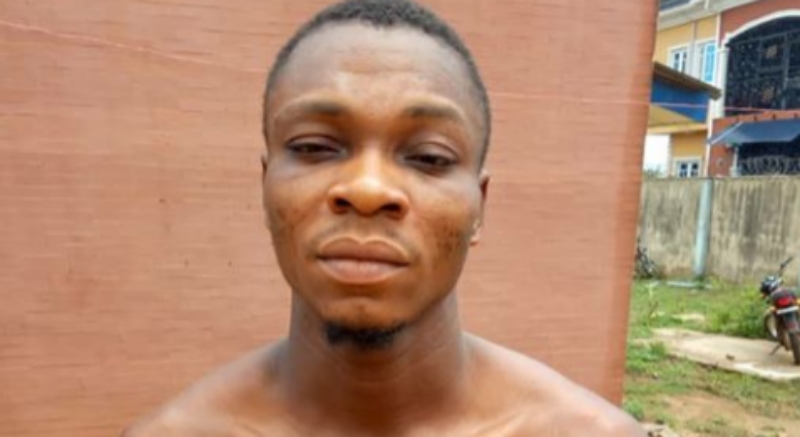 Operatives of Ogun State Police Command have arrested a 28-year-old man identified as Godday Robinson for alleged rape, stealing and attempted murder of a 17 yr old girl who hitherto refused his love advances.

This was contained in a statement released by the Police Public Relations Officer in the state, DSP Abimbola Oyeyemi.

According to the statement, the suspect was arrested following a report received by the policemen attached to Agbara area command that a young lady was lying unconscious in a ten feet deep pit in a nearby bush.

The Area commander detailed his men to the scene where the young lady was rescued with the help of members of the public and she was quickly taken to an hospital following the report received from the good Samaritan.

The victim told the police on April 22nd after she regained consciousness that she was coming from night duty which she performed in the company where she works, the suspect who has been making advances to her before, accosted her, capitalized on the isolated nature of the area and dragged her into the bush where he forcefully raped her, dispossessed her of her Galaxy Samsung phone valued at #85,000and then strangled her until she passed out momentarily.

The victim further disclosed that she was dragged further into the bush and dumped her into the pit by Godday who thought she had died.

The victim later regained consciousness and was able to call for help.

The area commander identified as ACP Bolanle Muritala gave a matching order to his detectives that the suspect must be traced and apprehended owing to the strength of the victim’s explanation.

The detectives swung to action immediately, traced the suspect and got him arrested on the 24th of April 2020.

When interrogated, Godday confessed to committing the crime but blamed it on the devil.

The post 28-year-old man arrested for allegedly raping and attempting to kill lady who refused his advances in Ogun appeared first on Within Nigeria.

Man defiles his two daughters aged 6 and 9 in Ondo

I gave you a hummer, a house, allowed you shop on my card, Jude Okoye slams May D

Man defiles his two daughters aged 6 and 9 in Ondo

I gave you a hummer, a house, allowed you shop on my card, Jude Okoye slams May D