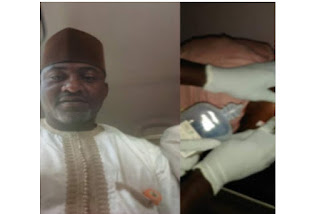 Spokesperson of the Kaduna State Police Command, DSP Yakubu Sabo has confirmed the arrest of one Aisha, who stabbed her
husband, Yahaya Maiyaki twice in the stomach on Friday, after they had a misunderstanding in their home located at Sarduana Crescent.

It was gathered that the couple had quarreled the night before the incident. According to the victim’s brother, Ahmed Maiyaki, the woman had thrown boiling water at Maiyaki but he managed to dodge.

ALSO READ  Why Many Women Are Unmarried: Omokri

The victim is presently receiving treatment at a private hospital in Kaduna.

DSP Yakubu Sabo said the suspect is in police custody and will be charged to court after investigation.
Source