*Mother of British children who drowned in Spain blames pool
*Olubunmi Diya insists the two children and her husband, who died with them, could swim

The mother of two British children who drowned alongside their father while holidaying in Spain has dismissed claims they could not swim and suggested there may have been a problem with the swimming pool in which they died.

The hotel’s owner has said police had found nothing wrong with the pool and officers have concluded the three had got out of their depths and were not strong enough swimmers to get out.

However, Olubunmi Diya said in a statement on Friday that she believed “something was wrong with the pool that must have made swimming difficult for them at that point in time”.

She said she was “utterly heartbroken” at their deaths, which she said happened when she and another sibling, Favour, were present. “The whole family, all five of us, went to the pool together and were all present when the incident occurred. The children were not left unattended. We followed the instructions displayed by the poolside at all times.

“Our family are utterly heartbroken by the events last Tuesday but we are comforted and strengthened by our strong faith in our Lord Jesus Christ. We are deeply shocked, saddened and struggling to come to terms with their passing.

“They all brought a joy and love to the world and to everyone that crossed their path. We love them all dearly, will always remember them in our hearts and miss them greatly.”

Following the release of Diya’s statement, the hotel’s owner said: “Diligent and exhaustive police investigations into this tragedy have confirmed that the pool was working normally and there was no malfunction of any kind. Our sympathies remain with the family at what we understand must be a stressful and desperately upsetting time for them.”

According to Spanish police, Comfort got into difficulty while playing in a swimming pool at the resort and her father and brother died trying to save her.

Gabriel Diya was minister in charge at Open Heavens in Charlton, which is part of the Redeemed Christian Church of God (RCCG), a Nigeria-based network of religious groups. 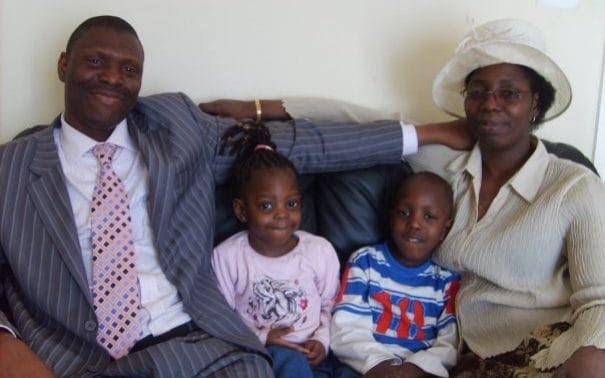 The Diya family with Favour, who survived, and Praise-Emmanual, who died

Olubumni Diya and Favour have been given psychological treatment.